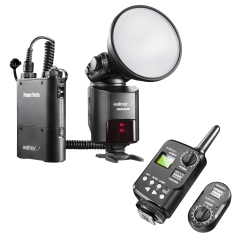 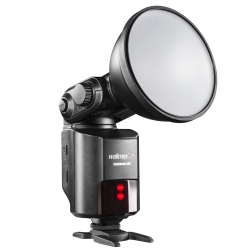 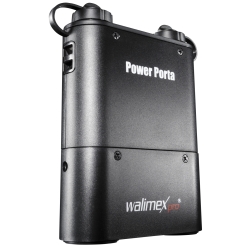 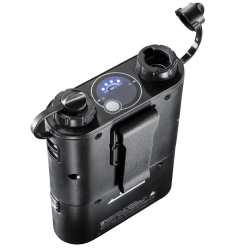 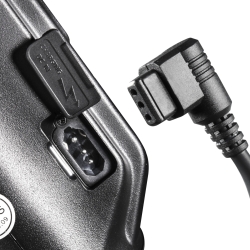 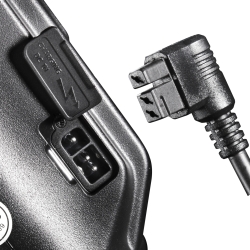 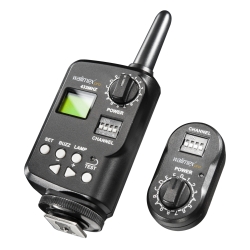 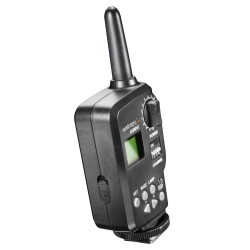 Simple and intuitive to operate
One of the major credit points of the Lightshooter is its simple and intuitive operability. It is simply plugged on the camera shoe and is then ready to start. You can make all settings in the clearly arrnaged control panel; even beginners will be able to become familiar with the operating concept, quickly and without any problems. The Light shooter is particularly flexible in use: It can be swivelled horizontally and vertically; its power can be adjusted from 1/1 to 1/128 over 7 aperture stops in 1/3 steps. You receive the walimax pro flash with flash tube, a reflector with diffuser disc as well as a 2.5 m connecting cable to the external powerpack walimex pro Power Porta. Further accessories, such as e.g. softbox or Beauty Dish can be attached at any time to achieve an additional light characteristic. This gives you the flexibility of a studio. Further benefits of the Light shooter 360 are the short charging time of 0.05 to 45 s (depending on flash power, powerpack charge and powerpack capacity) and the high number of flashes (max. 450). A walimex pro Power Porta – indispensable in connection with the Light Shooter 360 – supplies the required electric power. Alternatively one can also use the walimex pro Powerblock II to supply the required power.


Power Porta
The external powerpack walimex pro Power Porta makes sure that your attachment flash will not run out of power on the occasion of your next event. Just like the Light Shooter it also convinces with its extremely compact size and, at the same time, its very high power. The Power Porta increases the number flashes up to 1800 and also wins points with its capacity of 4500 mAh. Apart from that, the Power Porta can be recharged either with the supplied battery charger or the vehicle charging cable. The Power-Porta Powerblock comes with an exchangeable powerpack. Should one powerpack charge not be enough for the shooting, you can purchase another one as an accessory.

walimex pro universally compatible remote trigger set
The 16-channel radio remote trigger walimex pro Operator USB Plus enables wireless triggering of your flash over a distance of up to 50 meters. The receiver can be easily mounted  to the flash and triggered by hand or on the flash shoe mount of your camera. Nevertheless, the set is highly flexible in use. It is compatible with the walimex pro Light Shooter, the walimex pro Delta Transceiver, but also with each flash with USB-port.
Due the numerous adjustment possibilities the set is far more than just a wireless flash trigger. 16 possible channels enable the triggering of several flashes, which, die to their arrangement in groups, can be controlled with different power levels. Each flash can thereby be individually controlled or deactivated to achieve an optimal power setting. The remote trigger can alternatively also be used as a sole remote control for the flash. Both the signal sound and the setting light or the AF focussing light beam can be switched on or off, just as desired. The power ratio of the flash can be displayed in two different modes.