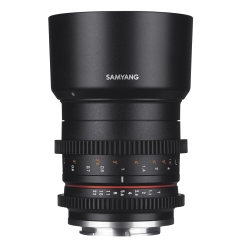 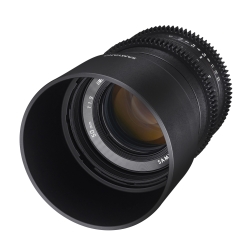 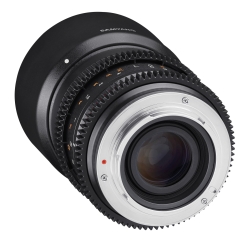 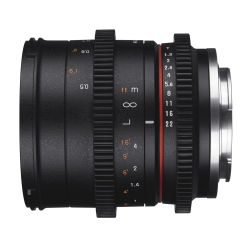 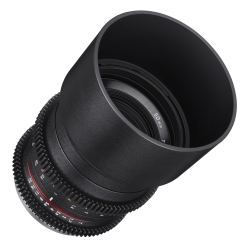 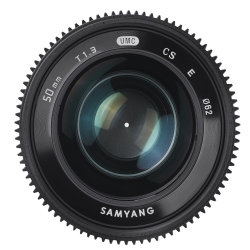 Versatile high speed video lens
With its standard focal length of 50 mm, the compact video lens is suitable for a wide range of applications with mirrorless system cameras and is particularly suitable for portrait and landscape photography. In particular, low light or shallow depth of field images can be captured thanks to the high speed of T/1.3. With an angle of view of approx. 31°, the lens achieves images from a natural perspective. The lens was specially developed for videography and therefore offers a stepless aperture, which allows a constant exposure during shooting. The aperture can be adjusted from T/1.3 to T/16, the focus is soft and smooth. The aperture ring and focus ring are equipped with a gear rim for the use of a follow focus system.

High quality optics
The lens has an aperture of 9 blades, which allow an almost circular opening and thus guarantee round highlights. The bokeh is soft and pleasant. A particularly high-quality optical construction consisting of 9 multi-coated glass lenses achieves excellent imaging results. In addition, 2 aspherical lenses ensure the best possible correction of chromatic aberrations. Lateral incident light and lens reflections are prevented by a lens hood, which can also be removed if necessary. The robust lens is internally focusing, so that the overall length of the optics does not change. Focusing is manual.

Using an APS-C lens on a camera with full-frame sensor
Some lenses developed for cameras with APS-C sensors can also be used on cameras with full-format sensors (mainly by using an adapter). Due to the significantly smaller image circle of APS-C lenses, the sensor area outside the image circle is black. The usable area of the image photographed with a full format camera thus equals that of a camera with an APS-C sensor and is correspondingly smaller. Therefore, the images have to be trimmed during post processing. In the video field, this method requires framing in post-production. The use of APS-C lenses on full frame cameras is therefore possible, but not recommended.

Why the aperture is sometimes given in T
In photography, the abbreviation "f" is used for aperture (from "focal length"). The given value indicates the ratio between focal length and entrance pupil at the lens. In film and video, on the other hand, the abbreviation "T", which stands for "transmission", is used. This value is calculated from the aperture f and the loss of light in the individual lens. It indicates the net brightness of the image that hits the sensor. This makes it possible to change the lens when filming: As long as the "T-Stop" is selected the same for both, it is guaranteed that two shots filmed with different lenses of the same scene are equally bright. Thus, there are no jumps in brightness when they are edited together.